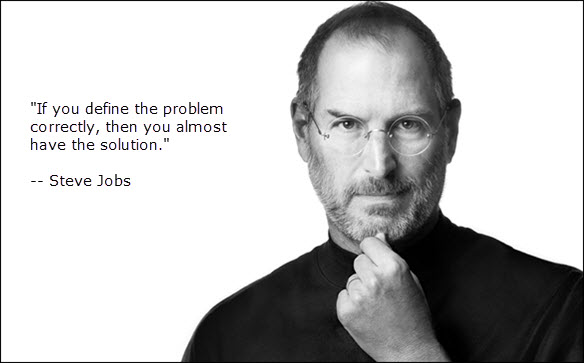 Define the problem right, and you’re halfway to a solution.

Define the problem wrong, and you’ll probably never solve it. You’ll waste all your time looking for a solution that doesn’t exist. That applies in every area of life, such as religion, relationships, science, and social problems. The best movie mystery of 2008 turned on mis-identifying the problem to be solved.

Ironically, it’s the best and brightest people who are most susceptible to GIGO errors when they think about social problems.

Their kind hearts make them want to believe the most optimistic things, so they often base their assumptions on optimism rather than realism. Their brilliant minds make them less prone to mistakes in reasoning than are most people. As a result, they go straight from errors in their premises to errors in their conclusions. And their high standards lead them to demand perfection: they see anything less as failure.

If they were worse people or not quite as smart, then they’d have a better chance of discovering the truth. When you start with incorrect information but make mistakes in thinking, then you might get the correct answer just by blind luck. It doesn’t happen often, but it does happen.

Those thoughts are inspired partly by another blogger’s reflections about racism, and partly by “Religion in an Age of Extremism,” a conference to be held next Sunday at the Manhattan Jewish Community Center.

The conference program asks: “Why are the great monotheistic faiths – Judaism, Christianity, and Islam – chronically unable to fulfill their own self-professed goal of creating individuals infused with moral sensitivity and societies governed by the highest ethical standards?”

Is that really the right question? It seems to define the problem incorrectly, based on an incorrect assumption about what religion can accomplish.

All three faiths are able to help individuals develop moral sensitivity and societies become more ethical. They’ve done so. Judaism taught the world about universal moral law under God, improving societies and people from ancient times to the present day. Christianity added emphasis on individual conscience and individual rights, helping to develop Western ideals of freedom and personal dignity. Even Islam was a great improvement on earlier practices in the region where it developed, giving at least some rights to women and, in the medieval era, fostering a high civilization to which we Jews contributed.

What they cannot do is make all individuals and societies ethical all the time, and they can’t do it because it’s impossible.

The problem is not a defect of the faiths themselves, nor of the peaceful, well-meaning leaders among them. It’s a limitation imposed by human nature, and by the fact that people are not all alike. Some are thoughtful, ethical, and peaceful; some are inclined to mindless violence; and most are in the middle, inclined to go in whichever direction they are pushed.

So the problem isn’t helping individuals develop moral sensitivity and helping societies uphold ethical standards. Enlightened religious faiths already do that. They don’t succeed 100 percent of the time, but it would be foolish devote more and more resources to such a fruitless quest. As the French philosopher Voltaire said, “the perfect is the enemy of the good.”

The problem is actually this: How can we do a better job of pushing that large middle group in the right direction? Saints don’t need pushing, and terrorists won’t accept it. But normal people, who are neither very good nor very bad, need guidance and encouragement. Because they have many other claims on their attention, our message must be simple, clear, consistent, and realistic. It must be achievable. And it must allow occasional failures, providing a way to recover from them and get back on the right track.

The solution is to talk to the majority in the middle. The results will never be perfect — only “better.”

1 Response to Solve the Right Problem