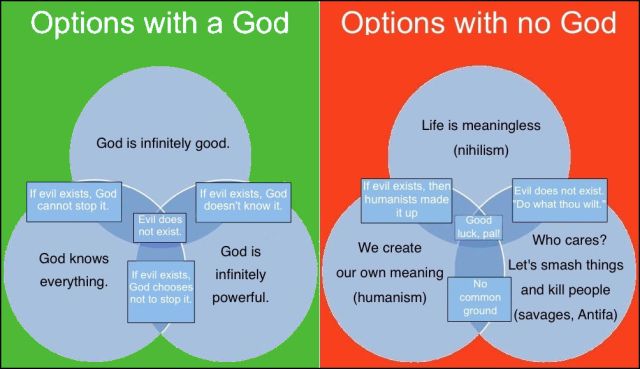 Today is Easter 2020, when Christians in Western countries celebrate (where permitted by law) the resurrection of Jesus. Eastern Orthodox Christians in Greece, Turkey, Russia and thereabouts celebrate it next week.

Today is also the middle of Passover, when we Jews celebrate our ancestors’ escape from slavery in Egypt. Passover started last Wednesday evening and ends next Thursday. We are making do, just like the Christians, using Facetime or Zoom for Passover Seders.

Both holidays include beliefs that help people lead happy, moral, productive lives. To the extent that they succeed, they can be justified on that basis alone. I’ll leave the theological arguments to the theologians.

But whether religious or not, most people wonder why evil exists.

So why does evil exist?

I can only give you my answer:

Because without it, a universe like ours is impossible.

Goodness exists for the same reason, but that doesn’t bother anyone.

A universe can either have just one thing, or it can have multiple things. Those are the only choices. There is no third option.

Just one thing was what our universe had before the big bang if you like science, or before the tzimtzum if you prefer mysticism.

Either way really amounts to mysticism. Neither time nor space existed before the big bang, at least in the way we experience them. Therefore, to talk about “before” the big bang is nonsense. But our language developed to handle life on earth, so it breaks down when we talk about how the universe began.

If a universe has multiple things, then it must be possible to distinguish between them. If two things A and B are the same in every way, then A = B. They’re the same thing.  Then you’re back to having just one thing in your universe. So the multiple things must all have specific properties that distinguish them from each other.

Suppose that your universe has four dimensions, as we perceive in ordinary life:

If things in your universe are distinct, then they can’t be infinite. They must be limited. Otherwise, each of them would occupy the entire universe. And then you’d be back to having just one thing in your universe. The same principle applies no matter how many dimensions your universe has.

Therefore, everything in our universe must be limited in space (along the X,Y, and Z axes) and in time (along the T axis). Things must also be smaller than the universe itself along each of those axes. As a result, things can move along those axes unless they collide with another thing.

A universe might also have some default values, such as (in our universe) the speed of light. Some things might have default limits along particular axes:

As it moves through time and space, a thing C might collide with another thing D. Depending on their properties, D might help C keep moving or stop it.

For example, some bacteria help people digest their food, while other bacteria are deadly. Both types affect our ability to keep moving along the time (T) axis.

Therefore, if a universe (1) has multiple things in it, (2) where the things interact, and (3) some of the things are self-conscious, then evil is unavoidable. It’s baked into the system. On the bright side, so is goodness.