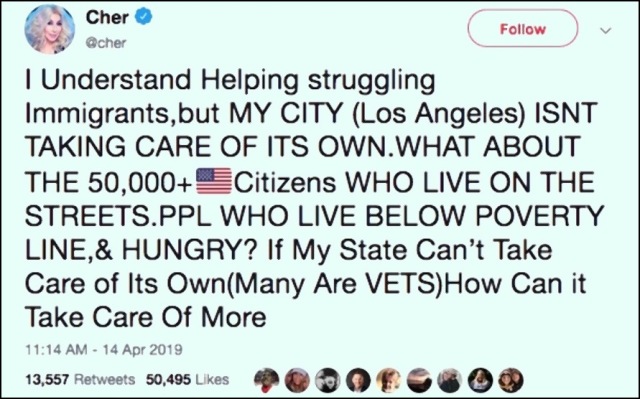 Cher, a pop singer who I loved for her 1990s music video featuring the animated characters Beavis and Butt-Head, has a new talent.

Her April 14th statement channels the spirit of the 19th-century American writer Ambrose Bierce. His book The Devil’s Dictionary includes this definition:

“CHRISTIAN: One who believes that the New Testament is a divinely inspired book admirably suited to the spiritual needs of his neighbor.”

Cher wants migrants as long as she and her city don’t have to deal with them.

Well-meaning individuals can support a policy of open borders or oppose it.

But it’s hypocritical to support open borders as long as it only affects other people.

That attitude is common, but it isn’t particularly Christian (or Jewish). We can do better. So can Cher.

Check out my new book Why Sane People Believe Crazy Things: How Belief Can Help or Hurt Social Peace. Foreword Reviews called it “intriguing and vital to living.”