Seeing the Reality Beyond “You” 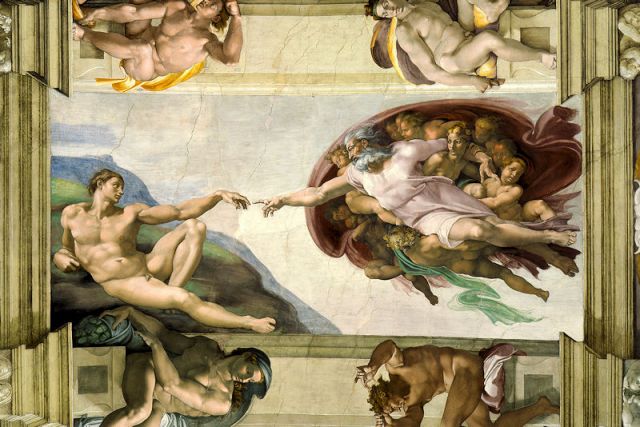 What’s real and what isn’t?

How do you know?

Could there be different kinds of realities that you know in different ways?

The greatest thinkers, both Jewish and gentile, have given the same answers:

For example, suppose I want to show you that dogs exist and what they’re like. Should I give you a mathematical proof? No. I should simply point to a dog.

Or suppose I want to show you that stealing is wrong. Should I set up a microscope? No. I should simply sneak into your house and steal your piano. On second thought, perhaps I shouldn’t do that, since it’s illegal and I might hurt my back.

The best way to know — and the best way to teach — depend on what kind of lesson is involved. The Bible and our Jewish tradition teach us important lessons in appropriate ways. The ways are generally not scientific, but they’re effective for their purpose.

Breath is more than life

”The Lord God formed man from the dust of the earth.” (Genesis 2:7)

God makes man (ha adam) from the earth (ha adama): the word pairing makes the connection clear. We are part of nature, as science agrees. But there’s more:

”He blew into his nostrils the breath of life, and man became a living being.” (Genesis 2:7)

”And the Lord God formed out of the earth all the wild beasts and all the birds of the sky, and brought them to the man to see what he would call them …” (Genesis 2:19)

How much more vivid and comprehensible are those simple verses than a ponderous lecture about biology and psychology? Whether we’re reading it today or 3,000 years ago, the message is clear. The lesson is taught effectively.

The breath in “you”

One of the great things about Hebrew College is that I get to talk with a lot of famous Jewish thinkers. One of them is Rabbi Arthur Green. In his book These Are The Words: A Vocabulary of Jewish Spiritual Life, he explains the significance of the Hebrew word atah (you). First, it always suggests a connection with God:

“Because Hebrew was preserved for so long as the language of the synagogue, most Jews for more than 1,000 years learned atah as the word that followed barukh (in the phrase ‘blessed are You’) … Every atah, then, contains within it some hidden fragment of prayer.”1

But it’s in the spelling of atah (aleph-tav-heh) that things get really interesting. Aleph is the first word of the Hebrew alphabet, and tav is the last:

“Since the mystical masters believe that God created all the worlds by combinations of letters, aleph and tav can be seen to stand for all Creation …”2

But that kind of creation is not alive in the same sense as human beings: it is merely an object, not a subject:

”Combining those two letters gives us only the word et, a particle used to indicate the direct object. Aleph to tav by themselves refer to the world only as object.”3

What’s missing? It’s “the breath of life,” represented here by the aspirated sound of the letter heh:

“With the heh added (even though heh is really nothing but a breath!), the word is no longer “it,” but “You”! The “aaahh” sound at the end draws us out, connects us to the other. With atah we address the living Subject, not the inanimate or abstract object.”4

The word atah reminds us that what you see isn’t what you get. Beyond the visible, physical “you” of another person is the invisible, spiritual atah, created by and connected to God.

Back to the Beginning

And so we are back where we started: In Genesis 2, receiving the breath of life (heh) that transforms us from mere aleph-tav objects into atah subjects who have self-awareness, intelligence, and spirituality.

Those are not scientific concepts. They’re not given to us in scientific lessons. They take the form of stories and speculation. But they tell us who we are, what we are, and how to treat each other. We would be morally impoverished without them.

Green, A. (2000), These Are The Words: A Vocabulary of Jewish Spiritual Life. Woodstock: Jewish Lights Publishing. Kindle edition.

N.S. Palmer is an American mathematician.
View all posts by N.S. Palmer →
This entry was posted in Bible, Jewish Philosophy, Judaism, Philosophy, The Jerusalem Post and tagged Arthur Green, Genesis, Hebrew, Hebrew College, These Are The Words, Torah. Bookmark the permalink.