Is the Messiah Coming? 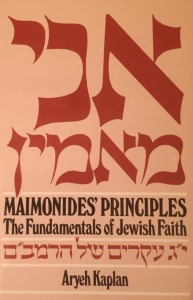 Is the Jewish Messiah coming?

Belief in a Messiah is central to the Jewish tradition. Maimonides listed it as a key principle of Judaism:

“I believe with perfect faith in the coming of the Messiah. No matter how long it takes, I will await his coming day.” 1

Those comments seem inconsistent. World peace is a noble aspiration. Unfortunately, history shows it is impossible without changing human nature or the nature of reality. But another comment says that neither will change, only that “the Jews will regain their independence.”

Maimonides could not have missed the inconsistency. What could he have meant by making the Messiah a central belief?

It’s worth considering how different Jewish philosophers might resolve the paradox. Maimonides was a rationalist, but committed to Judaism and the welfare of the Jewish people. Spinoza was a rationalist, but was hostile to both. Moses Mendelssohn was a pragmatist and, like Maimonides, he was loyal to Judaism and the Jewish people.

Suppose that Maimonides, Spinoza, and Mendelssohn are each given an apple and told that it is a duck.

Maimonides assumes that the statement must be true even though it seems false. He reinterprets it metaphorically in a way that makes it true. He says that even though the apple looks like an apple, in some non-obvious and morally instructive way, it’s really a duck.

Spinoza will have none of that. He says the apple is obviously an apple, so the statement is false and is trying to manipulate people by playing on their hunger. He does not assume that the statement must be true, so he sees no need to reinterpret it metaphorically.

Mendelssohn says that it doesn’t matter if it’s an apple or a duck. What matters is how we can use it as a guide for our conduct. The apple/duck question is a purely academic issue. What’s important is that we can eat either one of them.

I can’t tell you what Maimonides really believed about the Messiah. However, because of his rationalism, it’s unlikely he believed in the future arrival of a Jewish king who would perform miracles. What might he have believed, in the privacy of his own thoughts?

He might have believed that “the Messiah” is a metaphor for Yetzer HaTov, the impulse to goodness that exists in every human soul.

As Rabbi Joseph Telushkin has remarked,

“The messianic idea has long elevated Jewish life, and prompted Jews to work for tikkun olam (perfection of the world).” 3

The Messiah comes whenever we perform an act of loving kindness; when we support our community; when we turn enemies into friends; when we forgive; when we do a mitzvah; and most of all, when we turn our thoughts, our wills, and our lives to God.