The Costs of Forbidden Thoughts 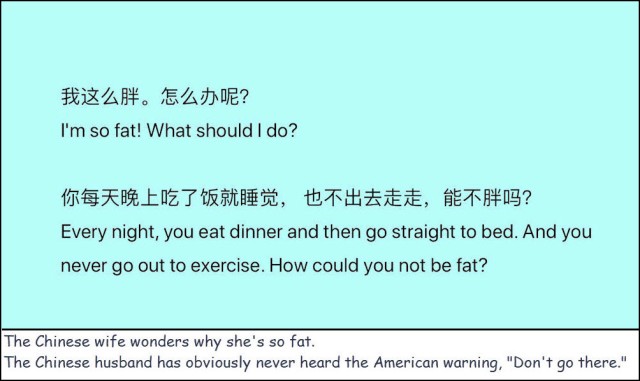 As regular readers know, I’ve been studying the Chinese language for the last year or so. China is America’s geopolitical adversary, but that’s all the more reason to understand it. I’m getting to the point that I can read and write simple Chinese sentences, and it’s a lot harder than Spanish.

One of the example dialogues in my textbook includes the two sentences shown in the graphic. A wife wonders why she’s so fat. Her husband, rather imprudently, proceeds to tell her. But he’s not wrong in thinking that her diet and exercise might be the issue.

If he wanted to avoid making his wife angry, then he might avoid talking about the real causes of her weight problem. That would put certain ideas “off limits” to discussion. As a result, he and his wife might develop a lot of unhelpful but inoffensive theories about why she’s fat. Maybe the bathroom scale is broken. Maybe her clothes shrank in the washer. Or maybe she has a metabolic condition. Any of those things could be true, but probably not.

Putting some ideas “off limits” means that the two people will talk and talk and talk, but they’ll never have much chance of solving her problem.

Now, if we can be satisfied with just talking about problems instead of actually solving them, then that’s fine. But we shouldn’t delude ourselves that we’re making any progress.

The same thing applies to social problems. If we decide in advance that some facts must  never be mentioned, then we’ve also decided in advance that it’s more important to talk about the problems than to solve them. Or at least, we want other people to see us talking about them, so everyone knows how much we care and what wonderful people we are.

The cost is that problems never get solved, because they can’t. They are real problems, but we’ve decided that whole areas of reality are off limits. And that’s not the only cost. When people realize we’ve deceived them, they sometimes over-react in the opposite direction. Psychologist Steven Pinker, author of The Better Angels of Our Nature, explained it this way in a December 2017 forum at Harvard:

“When they are exposed the first time to true statements that have never been voiced in college campuses or in The New York Times or in respectable media, that are almost like a bacillus to which they have no immunity, and they’re immediately infected with both the feeling of outrage that these truths are unsayable, and no defense against taking them to what we might consider to be rather repellent conclusions.

Here is a fact that sounds ragingly controversial but is not, and that is that capitalist societies are better than communist ones. If you doubt it, then just ask yourself the question, would I rather live in South Korea or North Korea. Would I rather live in West Germany in the 1970s or East Germany or in the 1960s? I submit that this is actually not a controversial statement, but in university campuses, it would be considered flamingly radical.”

Truth has nothing to fear from open discussion and debate: in fact, they are its closest allies. They help us correct our mistakes by exposing us to facts and viewpoints that we had not previously considered. Only intentional falsehood is afraid of debate.

Novelist Ayn Rand put it best: “There are no evil thoughts except one: the refusal to think.”

Check out my book Why Sane People Believe Crazy Things: How Belief Can Help or Hurt Social Peace. Foreword Reviews said that it’s “not only interesting, but vital to living.”