Too Centralized to Fail? 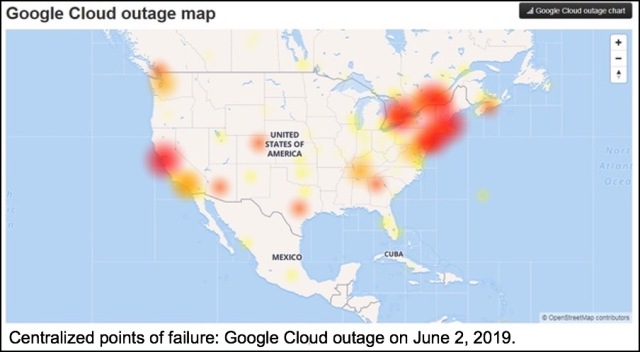 Google Cloud went down yesterday, and it took a big piece of the internet down with it.

But Google is just one company. How could it take down such a big portion of the internet?

After all, the internet was designed to survive a nuclear war. The Defense Advanced Research Projects Administration (DARPA) created it in the 1960s so that the government could still communicate even if most of America’s infrastructure had been destroyed.

It now turns out that the internet is nuclear-war-proof but not Google-proof. Why?

The short answer: Google has become a single point on which a complex, worldwide system depends. If that point fails, then all the other parts of the system that depend on it will fail along with it.

Like big New York banks after the crash of 2008, Google has become “too big to fail.” After 2008, the Obama administration bailed out the banks instead of letting them fail. Then, instead of breaking up the big banks to reduce the risk of future crashes, the government let the big banks buy smaller banks and get even bigger. You don’t need to be a genius to know it was a bad idea.

But back to Google. What now? Yesterday’s internet outage showed that Google is a point of vulnerability for all the systems, companies, and people who depend on it. Yesterday’s outage was fixed quickly enough to avoid causing huge damage. But what about next time?

Do we make the same mistake with big tech companies in 2019 as we did with big banks in 2009? Or do we break them up to reduce the systemic risk?

There used to be something called “antitrust law” that promoted competitive markets by keeping companies from getting too big and too powerful. Actually, antitrust law is still on the books but it’s barely enforced anymore. Maybe it’s time to get serious about it again.