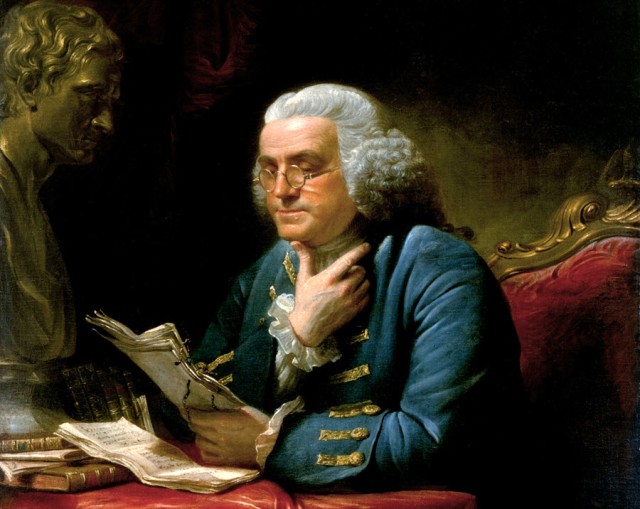 American founder Benjamin Franklin (1706-1790) wasn’t Jewish, but he might as well have been. He shared many of Judaism’s key moral values.

One of our most central values is moral seriousness: the idea that doing the right thing is important, so we should pay attention to how we live. It’s an inevitable side effect of having 613 commandments that govern every aspect of life. Regardless of their content, they require us in any situation to stop and think: What kind of situation is this? What moral principles apply? What is the right thing to do? It inhibits impulsive, careless action. Rabbi Jonathan Sacks summarized it well:

“Every aspect of life … had its precisely calibrated laws, its choreography of holiness. The fundamental idea of Judaism was and is that we bring God into the world through daily acts and interactions …”

Franklin enthusiastically supported that kind of thinking. He wrote that:

“At the last day, we shall not be examined what we thought, but what we did; and our recommendation will not be that we said ‘lord, lord’, but that we did good to our fellow creatures.”

As a young man, he made a list of virtues that he wanted to practice in his life. It’s easy to imagine a Jewish sage coming up with a list similar to the one in Franklin’s autobiography:

Each week, Franklin tried to improve his performance of a different virtue. The only one that gave him trouble was humility. He wrote that each time he became humbler, he was proud of himself for it. As a result, he had to start all over again.

In one of his most famous sayings, Franklin resolved to avoid evil gossip:

“I resolve to speak ill of no man whatever, not even in a matter of truth; but rather by some means excuse the faults I hear charged upon others, and upon proper occasions speak all the good I know of everybody.”

That is of course a Jewish value:

“The fact that something is true doesn’t mean it is anybody else’s business. The Hebrew term for forbidden speech about others, lashon hara (literally ‘bad tongue’), refers to any statement that is true, but that lowers the status of the person about whom it is said.”

Franklin emphasized using our time wisely, vowing to “lose no time; be always employed in something useful; cut off all unnecessary actions.”

“A rabbinic head of a yeshiva once established a special five-minute study session. Even students who lived blocks away were expected to come back for this very short activity. As the rabbi explained, ‘I want you to learn that something can be accomplished in five minutes.’”

Jews for millennia have wrestled with the problem of how evil can exist in a world created by a perfectly just God. Jewish Journal columnist Dennis Prager sees it as a reason to believe in the world to come:

“To state this case as starkly as possible, if there is nothing after this life, then the Nazis and the children they threw alive into furnaces have identical fates. If I believed such a thing, I would either become an atheist or hate the God who had created such a cruel and absurd universe.”

Writing for The Pennsylvania Gazette in 1734, Franklin’s argument was almost identical to Prager’s:

“Many arguments, to prove a future state, have been drawn from the unequal lot of good and bad men upon earth … to see virtue languish and repine, to see vice prosperous and triumphant: such a view, I confess, raises in us a violent presumption that there is another state of retribution, where the just and the unjust will be equally punished or rewarded by an impartial judge.”

Like Maimonides, Franklin leaned toward Deism – the view that God set up the universe and its laws, then mostly left it alone. However, he reassured his Christian parents (whom he addressed as “Honored Father and Mother”) that he was open to hearing any argument:

“All that should be expected from me is to keep my mind open to conviction, to hear patiently and examine attentively whatever is offered me for that end; and if after all I continue in the same errors, I believe your usual charity will induce you rather to pity and excuse than blame me.”