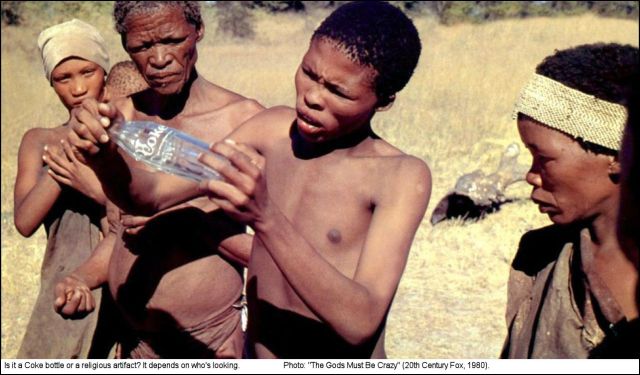 Truth can be a matter of life and death.

That’s no surprise, since it’s happened many times in history. But I want to make a much more difficult argument:

A theory of truth can get people killed.

Huh? What’s a theory of truth? And how could it possibly get anyone killed?

Theories of truth are part of philosophy. Everyone has a philosophy. And if you don’t consciously choose your philosophical ideas, you’ll unconsciously absorb the ideas from your environment. Often, the ideas will be wrong. Sometimes, they’ll be harmful.

A theory of truth tries to answer two questions:

But let’s take another look at that fact. The first thing to notice is that it can be true or false. When you perceive a Coca-Cola bottle on the table, you might be mistaken. It might be a bottle of Pepsi or even a small lamp.

Moreover, to recognize a Coca-Cola bottle on a table as a Coca-Cola bottle on a table requires you to know what bottles, Coca-Cola, and tables are. That requires the ability to classify bottles as a type of container, Coca-Cola as a type of carbonated beverage offered for sale, and tables as a type of furniture used by humans for specific purposes. It requires cultural knowledge of soft drinks and commercial products. Depending on who sees it, it might include knowledge of how glass is made, or a list of the chemical ingredients of Coca-Cola.2

How much of that is sitting on the table, “outside of the mind,” as Maimonides said? Hardly any of it:

“These and many other notions are so bound up with the identification that our thought would lose its character with the removal of any one of them … And these essential elements are not given in sense at all. They are elements in a system, and a system of no little complexity.”3

Most of the so-called “fact” is in the mind of the perceiver. And that’s where we get into trouble.

People unconsciously think of truth as correspondence because it seems like common sense. And the same people have beliefs, some good and some bad, about all kinds of situations. The idea that their beliefs correspond to facts independent of their own interpretation means that anyone who disagrees with them must be wrong. It can’t be just a difference in viewpoint. If the belief is about something important, it’s a short jump from “wrong” to “evil,” and thence to violence.

Let me introduce you to the San people, an African tribe depicted in the 1980 film, “The Gods Must Be Crazy.”

The San live in the Kalahari desert and have had no contact with modern civilization. One day, a plane passing overhead drops a Coca-Cola bottle that lands intact on a soft area of ground. The San have never seen a glass bottle and they consider it a gift from the gods. They think it might be a musical instrument or a tool for craft work. Later, a Western biologist sees it and recognizes it as a Coca-Cola bottle: a manufactured glass container that normally contains a sugary beverage.

The San neither believe what the biologist thinks nor would they understand it. They have never seen factories or manufactured items. They’ve never before seen glass. They have never tasted Coca-Cola or seen any bottled beverage. They know the object fell from the sky and has unusual properties. They consider it a religious artifact. Are they wrong, or do their different beliefs simply result from their different concepts and experiences?

Disagreements about bottles on tables are trivial. But now apply the principle to something of greater consequence, such as the nature of God, the meaning of the Bible, or who has a rightful claim to the Temple Mount. It’s no longer a trivial disagreement. At best, there will be bitterness and hatred. At worst, people will get killed.

The correspondence theory of truth is not only incorrect, but harmful. What’s the alternative?

The alternative is the coherence theory of truth, which says that beliefs are true if they fit logically with a system of other beliefs. “Fit” means that:

Now, the idea of truth as coherence is a little counter-intuitive. Among other things, it means that there are degrees of truth. A belief that fits into a large system and has many logical connections to other beliefs is more true than a belief with a smaller system or fewer connections. It’s also more certain because the surrounding system provides lots of evidence for it. Spinoza didn’t quite advocate the coherence theory, but he came close, and he recognized degrees of truth.4

Because the coherence theory implies there are degrees of truth, it recognizes the existence of both objective reality and absolute truth.

Everything we perceive and believe is interpreted by our belief systems and conceptual schemes. There is an objective reality, but we can’t get to it. For us, “objective reality” means reality that can be confirmed by other people.5

Beliefs are absolutely true if supported by an infinite system of other consistent beliefs, but we are finite so we never have access to an infinite system. All of our beliefs are relative to our own, finite systems of belief. Only God knows absolute truth because only God can comprehend the infinite:

“In all likelihood, there will never be a proposition of which we can say, ‘This that I am asserting, with precisely the meaning I now attach to it, is absolutely true’ … The road of history is so thick with discarded certainties as to suggest that any theory which distributes absolute guarantees is touched with charlatanism.”6

Logically, it means that apparently inconsistent beliefs can all be true, each relative to its own supporting system. The beliefs are about different things so they don’t really conflict. The San people believe a Coca-Cola bottle is a religious artifact because that’s how it fits into their system. We believe the religious artifact is a Coca-Cola bottle because that’s how it fits into our system.

By itself, understanding the nature of truth won’t bring social peace. Human beings will still be human beings. Conscience and intelligence will still battle Yetzer Hara and our lower animal nature. Terrorists won’t think about their philosophy.

However, if our understanding helps us support greater tolerance of differing viewpoints and ways of life, we can improve things a little. That’s the truth.

N.S. Palmer is an American mathematician.
View all posts by N.S. Palmer →
This entry was posted in Jewish Philosophy, Judaism, Philosophy, The Jerusalem Post and tagged Blanshard, Coherence, Correspondence, Maimonides, Spinoza, The Gods Must Be Crazy, Theories of Truth, Theory of truth, Tolerance, Truth. Bookmark the permalink.